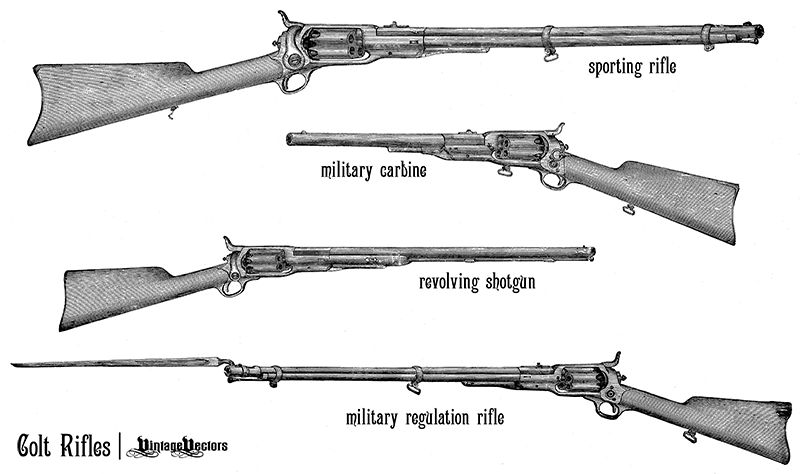 The idea of a multi-shot long gun has been around since the 1500’s. There is an example of a match lock revolving cylinder long gun in the Musee de L’Armee in Paris. They proved to be difficult to manufacture and prone to multiple discharges. It was a different situation and they proved to be more reliable when the flint lock became popular in the 1700’s. The first flint lock revolving cylinder rifle to be made in quantity was the Collier designed by a New Englander by the name of Elisha Collier. It was fairly popular in England. With the invention cap lock ignition it made revolving cylinders more practical. However, the escape of gas between the cylinder and barrel and the possibility of multiple discharges were still present.

With the advent of the percussion system many others joined the revolving breech long guns. David G. Colburn, designed one that was manufactured by William Billinghurst of Rochester NY and Benjamin Bigelow, G. A. Brown who were protégés of Billinghurst. Up until this time revolving cylinder long guns had to have their cylinders revolve by hand. During the age of expansion in the United States it was comforting when traveling out west to carry a firearm for protection that offered multiple shots without having to reload as is customary with the muzzle loaders of the day. The novelty of most of the Billinghurst rifles is that they were made with 2 barrels. The cylinder revolved around a central barrel. It wasn’t until Sam Colt entered the picture with his first factory in Paterson NJ that revolving cylinder rifles under his patent, the cylinder was indexed by use of an under lever or thumbing back a hammer.

Colt tried to interest the US Army in purchasing his revolving cylinder rifles and hand guns, a small quantity (100) were sold to the US Army for a trial usage in Florida against the Seminoles. There were 3 models of the Colt Revolving Cylinder Rifles made at the Paterson factory of which there is: First Model, Second Model and the 1839 Carbine. The US Navy purchased 50 of the 1839 Carbines as well as 180 Carbines purchased by the Republic of Texas. Due to financial difficulties the Paterson factory closed. That was not the end of Sam Colt. He was finally awarded a government contract for revolving pistols to equip the Dragoons during the war with Mexico.

This new prosperity allowed him to build a new factory in Hartford CT. While his revolving pistols were very popular he sold tens of thousands. He still wanted to design and manufacture a revolving cylinder long gun. He succeeded in designing and manufacturing a revolving cylinder rifle with a solid frame that was patented in 1855. They were moderately popular as sporting rifles, but with the start of the Civil War he was able to sell a substantial quantity to the Union Army. For a short period of time Berdans sharp shooters were issued Colt Revolving Cylinder Rifles. During this time period Colt was not the only company designing revolving cylinder rifles.

There are other makers of revolving rifles; Ethan Allen (not to be confused with the Revolutionary War Hero), North, Savage, James Warner and manufactures in Europe. There was even a revolving cylinder rifle used in small quantities by the Confederates that was based on the Lemat Revolver; which interestingly has a cylinder that revolves around a central barrel.

After the Civil War, Colt’s largest competitor in the revolver market, Remington produced a revolving long gun based on their solid frame revolver in calibers 34 and 36. A replica of this rifle is imported today and manufactured by A. Uberti. Interestingly enough that Uberti has manufactured and sold more of these than Remington did originally. Even Smith and Wesson produced a revolving long gun based on their number 3 top break revolver. It was chambered for the .320 cartridge. The Smith and Wesson produced this as a target firearm. It was offered with 3 barrel lengths 16, 18 and 20 inches and optional target sights. Smith and Wesson also patented a revolving long gun that had three tubular magazines and an interesting full length cartridge that moved forward to seal the barrel cylinder gap when the hammer was cocked and it held 21 rounds. This may have been the idea that lead the brothers Nagant to design their gas sealed revolver.

With the advent of repeating rifles the revolving long guns did not seem to be necessary. However, that did not stop the Republic of Mexico from equipping their police forces with revolving long guns manufactured in Belgium by N. Pieper. Even the Russians built some carbines based on their gas sealing Nagant revolvers. The biggest problem with most revolving systems is the escape of gas between the barrel cylinder gap that could cause harm to the shooters support arm. There have been many patents trying to eliminate this problem.

The need for a revolving long arm seemed none existent until the early 2000’s when Taurus/Rossi introduced their Circuit Judge which is a multi-purpse shotgun/rifle combination in 410 gauge and 45 long colt. Taurus/Rossi did not eliminate the problem of gas discharge at the barrel cylinder gap but however, incorporated a gas deflector to prevent harm to the support arm.